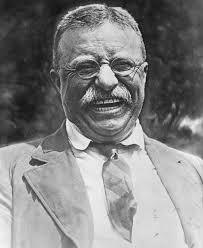 Theodore Roosevelt (1858-1919) is the only person ever to receive any country’s highest military honor and the Nobel Peace Prize. The 26th president of the United States, this brilliant historian and energetic nature lover enacted legislation to protect and preserve 230 million acres of land—one-fifth of America. He was the first president to fly in an airplane, go down in a submarine, own a car, and have a telephone in his home. He changed the way people in America thought of their leaders by demonstrating that one’s character is as important as one’s accomplishments. He was a devoted son, husband, and father who wrote 45 books, spoke 6 languages, and read, on average, 2 books a night. Fearless and full of adventure, he boasted, “No one has ever enjoyed life more than I have.”

It is hard to fail, but it is worse never to have tried to succeed.—Theodore Roosevelt

Man in the Arena

I don’t care what the others say,

I will always do what’s right.

I don’t care how tough the challenge,

I will hold my honor tight.

No matter what the situation,

I know what I must do. I will be brave and true

The one who gives it his all.

Man in the arena,

Who boldly answers the call.

The one who does his best because

He’s not afraid to fall.

Man in the arena.

Nobody cares how much you know

Until they know how much you care.

Do what you can with what you have,

And be sure your heart is there.

Something might be hard to do, but if it serves a worthy cause,

His goals are firmly set.

His passion leaves him no regret.

Man in the Arena ~ From a speech Roosevelt gave in 1910: "It is not the critic who counts; not the man who points out how the strong man stumbles, or where the doer of deeds could have done them better.  The credit belongs to the man who is actually in the arena…” He felt that it was important to recognize people for trying, even if their actions did not lead to success.

Proceed ~ to continue on a course of action. Roosevelt believed in hard work and dedication to the causes he supported. Once he decided to do something, he would proceed even if the odds were against him. He was not interested in recognition for his accomplishments. He would “proceed without applause.”

Historian ~ an expert in history. Roosevelt once served as the president of the American Historical Association. He was also a naturalist and an authority on large American mammals. Two of his greatest passions were reading and writing. It is said that he wrote over 150,000 letters in his lifetime.

Highest Military Honor ~ Theodore Roosevelt was awarded the Medal of Honor posthumously (after his death) in 2001. He was recognized for his leadership of a volunteer regiment known as the “Rough Riders,” during the Spanish-American War. The Medal of Honor is the highest military decoration and was established by Abraham Lincoln during the Civil War.

Enacted Legislation ~ made laws. Roosevelt believed strongly in conservation and preservation of the environment. As President, he established 150 national forests, as well as a number of federal bird reservations, game preserves, national parks, and national monuments.