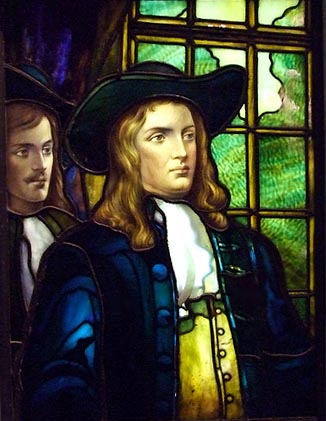 William Penn (1644-1718) was the first great hero of American liberty. A true visionary, he spent many years in English prisons as a result of his belief that everyone deserves respect. After the King of England gave him a huge section of land in America, he traveled throughout Europe encouraging people to come with him and take part in his “Holy Experiment” known as Pennsylvania. It became a place of safety for people the world over who sought freedom and peace, including Native Americans. They lived, in Penn's own words, “with liberty and justice for all” and inspired a community named City of Brotherly Love: Philadelphia. His lifelong devotion to truth and equality inspired America’s other Founding Fathers and the unfolding of American democracy.

Seek not to be rich, but happy. Riches lie in bags.

Happiness in contentment – something wealth can never give.—WilliamPenn

By those with narrow-minded views.

You need not stay and suffer through this unrest.

Beyond the western sea

There lies a colony—

A promised land where all are free.

Where everyone can be

The voice of liberty.

We practice faith with action. It gives us strength to dare.

The Inner Light is our guide.

The path to your salvation is over there.

Where Brotherly Love will shine, peacefully.

Come with me! Pennsylvania waits for thee!

Come with me! Pennsylvania waits for thee!

Visionary ~ a person who plans the future with imagination and wisdom. William Penn envisioned a place where all people could live peacefully.

Holy Experiment ~ When he founded the colony of Pennsylvania, he promised religious freedom, a peaceful society, and equality for its citizens. Because of this, the population grew, and it became one of the most prosperous American colonies.

City of Brotherly Love ~ Philadelphia, the capital of Pennsylvania until 1799. Its name comes from the Greek words philos (loving) and adelphos (brother).

Pacifists ~ peacemakers, people who believe war and violence are wrong. This was at the core of Penn’s beliefs.

Thee ~ a form of the word you, usually said with great respect and affection.

Oppressed ~ subjected to harsh treatment. In England, Penn was often mistreated because of his Quaker beliefs. He saw that others were also treated unfairly because of the narrow-minded thinking of those in power. The King and his officials were not willing to tolerate people whose views were different from their own.

Inner Light ~ a divine presence in the human soul believed to be an enlightening and guiding force. William Penn felt this “inner light” led him to the founding of Pennsylvania.

Salvation ~ saving or protecting from harm. Penn promised that all of the people who came to Pennsylvania would be safe, no matter what their beliefs or heritage.